I am so sick of not feeling well. The last few months I have been plagued with urologic … issues. I am convinced at one point I had a kidney stone (though the ct scan pretty much said that that was not a possibility). Indulge me while I retrace my steps for the last few months…

July – woke up in the middle of the night with a searing, horrific pain in my left rear flank aka… kidney area. Pain so bad I couldn’t sit still. I ended up vomiting and pacing for about 3 hours, before a heating pad finally helped assuage the pain. The next few days… no pain. Then I get a pain sort of like I’d been kicked in the crotch. This sends fiery pain up into the abdomen and I decided to make a doctor’s appt. I hadn’t yet because really, I’ve had a kidney stone before and there isn’t a whole lot they can do. Anyway, my urine tests positive for infection and blood, I get an antibiotic and am told to take ibuprofen for the pain. (Which by the way is a whole other entry… I have high blood pressure--- not horribly high, but I take a pill for it goddammit. Apparently NSAIDs aren’t good for hbp. The fuck?) I am also scheduled for a ct scan the next week and away I go.

The abdomen/crotch pain lasts for a few more days. At one point it is so bad I have to leave a coworker’s bbq because I am literally afraid that I am going to either vomit or pass out on the spot. I end up driving home because the concentration is the only thing that keeps my mind off the pain. Aaron and the boys are in the car and the noise level is making me frantic. I put in my earphones and blast rap music and do Lamaze breathing the whole way home because it kind of helps, but OMG. THE PAIN. We get home (and have I mentioned it’s like 90 degrees out? One of the few days this past summer that got really hot) and I pass out on the bed, in a vicodin haze. I call the doctor and they have me come in (again) and leave a sample. Surprise! It’s positive for blood again. I believe I received a script for an antibiotic, but I can’t remember.

August- Go in for my ct scan on a Friday and Saturday night am up again with that horrendous flank pain. Awesome. I call on Monday for the results and am told it was normal. Proceed to start an argument with the doctor about it, and tell her that I was up again with that pain and she insists that I come in and be checked out again. I go in, she tells me she had a different radiologist look over the results to be sure something wasn’t missing and no … nothing. We look at the ct scan and I proceed to have a mini anxiety attack … I don’t need to see my heart and my ovaries and ooh look, there is my uterus. Ugh. Freaked me out. Anyway, I am a medical mystery. I am still having the crotch pain and so I am sent to a Urologist, and given a script for flowmax (used with kidney stone patients I guess) as a parting gift.

Urologist is about 8 years younger than me… (I’ve recently discovered the joys of aging… it’s very, very odd.) She also does not see any evidence on ct scan of a stone. She does note that a ureter from my kidney could possibly be slightly enflamed but is hesitant to even say that. Urine culture at her office shows possible infection, I get another antibiotic and am told to come back in a week or so. As I am leaving she says “call me if you see blood in your urine again, and we’ll probably test you for bladder cancer.” Allllrighty then. In the mean time, I wake up on a Sunday night in so much pain in my left flank again I think I am going to be sick. I spend about 7 hours pacing in my bedroom and then when the pain FINALLY subsides I spend the day in bed sleeping. I call and report this to the doc and am advised to take ibuprofen. I say “I AM LIVING ON IBUPROFEN AND THIS HAPPENED DESPITE IT.” They make another appt for me in Sept.

September… I go back, I am STILL having the damn crotch pain… kind of like an urgency, but not really like a UTI pain. Hard to explain. She thinks at that point that perhaps the problem is ovarian in nature. I think she might be on to something, I have had irregular cycles for the first time in my life (skipping a month here and a month there.) But I am still kind of insistent that it’s urologic in nature. She humors my insistence that it’s bladder related and gives me a prescription of vesicare to see if that helps. (it didn’t.) She reviews my symptoms again and sets me up for an ultrasound… one of the… up close and waaaay too personal variety for a week later.

I spend about 3 days googling ovarian cysts, ovarian cancer, polycystic ovarian disease, ovarian cyst rupture and anything else I can think of. I fit some of the symptoms (of course) but not all of them. I am not freaking out, but I’m not feeling awesome about it either.

I go to my ultrasound appt, and on my way up to that office, I stop by the lab and insist on leaving a urine sample, because…. Well why the heck not. I’m there and it seems like a good idea. I have the ultrasound, which was motherfucking torture. A few days later I get a call, my urine culture was positive for infection again (MOTHEREFF.) and my ultrasound was normal. Of course it was. Not that I want to have a problem, I would just like to FIX the problem I am having. She gives me a script for Macrobid for the infection and I am set to check in with her tomorrow.

Which brings me to today. I threw my back out a week ago and have been living on ibuprofen and naproxen. I wasn’t sure if I was still having a problem or not, seeing as how I was medicated … until last night. I noticed that I am probably having blood in the urine again, and almost peed my pants twice yesterday… and it’s not like I drank an excess of fluids or was holding it for a long time. Also, kind of painful to pee. Also, I uh, never pee my pants. W.T.F.

Spent the evening fighting off tears and googling bladder cancer. Feeling better about it today, but damn, this is wearing me down. I’m tired of hurting. I’m tired of worrying about it. Too add insult to injury that damn macrobid started to give me thrush. I think I stopped it just in time, but I am telling you, a day or two more on that stuff and I would be hurting. I had thrush after my hospital stay for pneumonia last year… it did wonderful things to my lips. 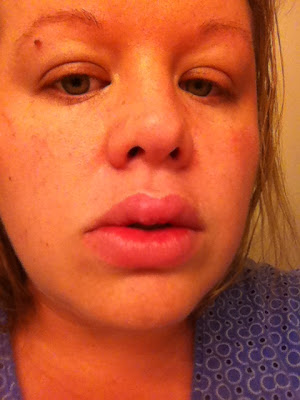 Posted by Allison xoxo at 15.10.12
Email ThisBlogThis!Share to TwitterShare to FacebookShare to Pinterest