I don't know why I haven't updated. Clearly I suck. Today we were too busy out enjoying the sunshine! We are over the tummy woes, though now my parents are just getting over it. This crap was GNARLY.

I am still in shock that he wore the hat w/o complaint. amazing.

I bought those sandals for him when I was about 3 mos pregnant with him.

He loves his new steering wheel... we were going to sell it at our garage sale, but decided nolan would get a kick out of it, so we cut the cord off and we were right!

mama is still torturing him

Posted by Allison xoxo at 30.5.06 No comments:
Email ThisBlogThis!Share to TwitterShare to FacebookShare to Pinterest

Still battling this stomach virus... the SAME one I got on mother's day a WEEK ago is still giving me some digestive woes, and is also giving Nolan a bit of a time. He's decided that he doesn't like his formula anymore and is highly pissed if you press the issue. Pedi said he should get 24 oz a day right now, and we are averaging about 12-16oz if we are lucky. Nolan's also decided that he enjoys emptying his bowels once a day in liquid form... ok, maybe he doesn't enjoy it... Lord knows I don't. How many outfits can he shit through in a week you ask? It's bad. At least he's not going all day everyday, but still.

Aaron came down w/ the virus in the middle of the night last thursday. He spent the entire day laying in bed on friday, getting up only twice for very short periods of time. Poor guy was OUT OF IT. He's never sick, so it was really wierd to see him like that. He was feeling a bit better saturday, and yesterday was much better. I'll be glad when this bug is out of our home completely.

So here are some recent pics of our little dude...

He shoots, he scores! from the rear

Nolan goes in for a better look

Reading his book with such concentration


Posted by Allison xoxo at 22.5.06 No comments:
Email ThisBlogThis!Share to TwitterShare to FacebookShare to Pinterest

How we've been amusing ourselves as of late...

Everything considered it was a great weekend... I had to take the west-b exam on saturday... it's the Washington Educators Skills Test - Basic... you have to pass it to get accepted into the teacher prep programs.

Anyhoo, that accounted for nearly 4 hours of my day. SUCK. After that we went to a lovely bbq to meet the mom and sister of an online pal. We met through our due date group on fertility friends, and now we all sort of chat on the board that evolved from that group. A handful of us in the seattle area try to meet up every now and then to let the babies play and to chat and such. Nolan had 4 friends there that day! It was great because they aren't really at that age where they get mad and throw tantrums yet.

when we got home I was surprised with a spotless kitchen, a bed that was made and a clean house! Aaron was busy! I was dreading getting the house in order too, so that was awesome. and I got to open my mother's day gifts that night. He did good.

Sunday morning I went and had coffee with one of my best friends. we are going to try and make a habit of that. Aaron kept nolan so I could go and have a little time off and also so we wouldn't disrupt his naps if at all possible. Then I came home (to a vacuumed house no less - seriously, I think he's a keeper!) and we ate lunch. Around 1230 I started not feeling so good. Tummy cramps... nausea... kind of the pre-cursor feelings to the green apple two-step.

So I laid around till it was time to go, and we packed up nolan and the rest of the stuff we needed and headed over to my sister's house for dinner with my parents and her boyfriend's parents. I felt like dog shit... and spent most of the time laying on the couch until we went home. In fact, now at 1pm on monday, all I've had to eat in the past 24 hours is a bowl of cereal... and I don't see that changing any time soon. ugh.

BUT! the day was not a loss! Even though I was feeling terrible we still had a lovely time. Aaron and Nolan got a great spaghetti dinner w/ garlic bread, and chocolate cake for dessert. Man, you know I wasn't feeling good if I passed up a piece of my sister's chocolate cake. We were also surprised with a very cool gift from my parents and my sister. Behold:

the double stroller... boy if it hadn't hit home that our world is about to change in a big way, seeing this puppy sure made it! It's really cool, and nolan gave it a rousing seal of approval (that is, after thorough inspection of all 4 wheels.) We were so surprised! I know we said it a lot yesterday, but thanks mom, dad and lori!

He loves him some bread

nolan and daddy hung out quite a bit while I laid around.

Mr. precise and his precision fingers inspect the controller

Nolan and grandma/nana -- mom have you decided what he's going to call you YET?

*sniff* I don't see any bit of him that's baby like in this picture... he is most definitely becoming a little boy.

Mom and Lori and I... I was looking at the comparison pic from 2004... when I looked a little less linebackerish and almost wept. I WILL BE THIN AGAIN! Still, it's nice to have a picture together, and despite my own quibbles about my appearance I kind of like this picture.

So yes, it was a great day despite my tummy ailments... despite the fact that we came home and I laid in bed writhing in discomfort for 5 hours before FINALLY getting sick on and off all night. It was a relief though, and I hope tonight fares better.

Not too bad for my first mother's day... oh and did I tell you that my mom and I bought each other the SAME book for gifts? Great minds think alike!

And of course, the best gift of all... my sweet boy.

Posted by Allison xoxo at 15.5.06 No comments:
Email ThisBlogThis!Share to TwitterShare to FacebookShare to Pinterest 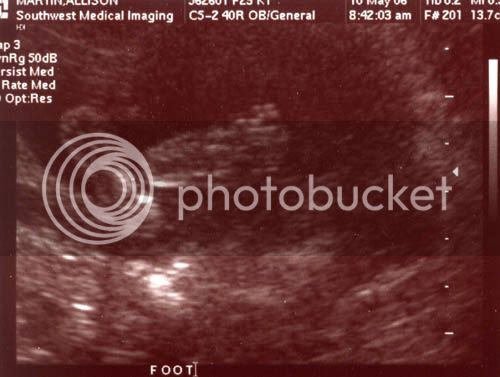 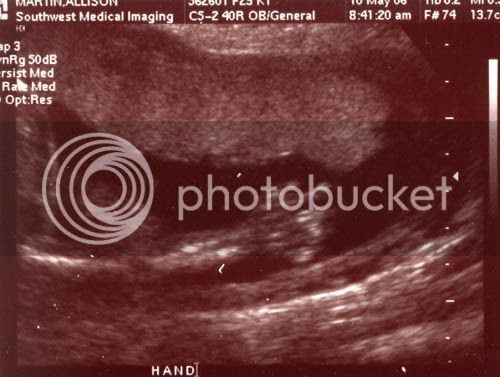 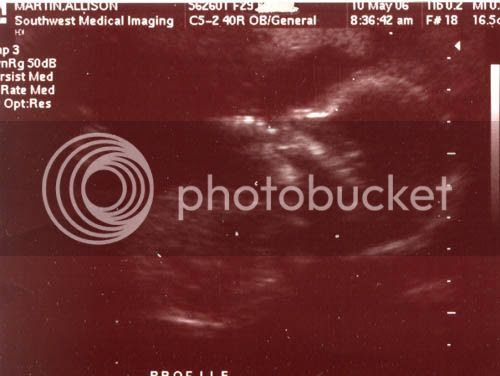 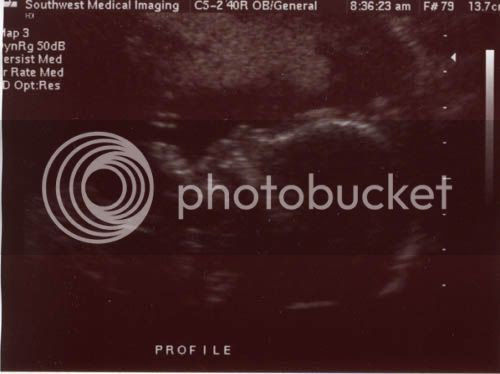 and some of the stuff we bought the little guy yesterday 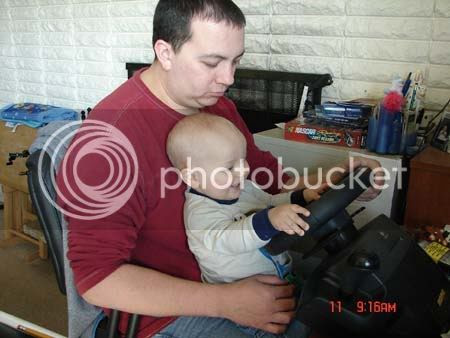 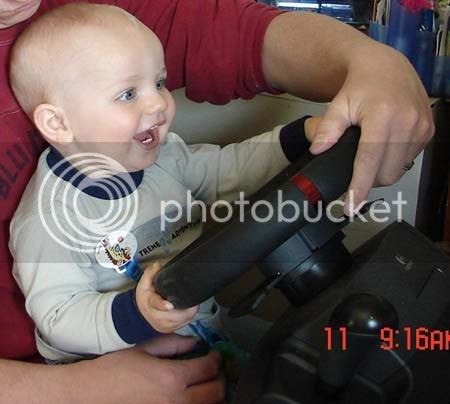 Posted by Allison xoxo at 11.5.06 No comments:
Email ThisBlogThis!Share to TwitterShare to FacebookShare to Pinterest

Holy crap was I surprised!
Posted by Allison xoxo at 10.5.06 No comments:
Email ThisBlogThis!Share to TwitterShare to FacebookShare to Pinterest

After he took a two hour nap this morning, he was in a much better mood... seriously, like night and day. He's down for nap number two right now, so I thought I'd share some videos of my sweet boy being sweet. :-)

So to make a long morning so far short, I dumped a liter of water on the fucking couch, so I am no trying to dry the cushions and floor beneath it. I blame asa that fucker.

Nolan slept in until 8 today, but to make me not like it he is being a real bear. whiney, clingy, angry, ... so so SO FUN. I do not deal well on days like today.

Tommorrow is our big ultrasound... 8:15am pst I'm hoping for open legs so we can see what flavor this bean is.

no pics because mr. screams a lot is currently screaming and it's 15 minutes until naptime, but I think he's going to go down early today.

Have I mentioned I'm tired of the fucking screaming? So tired, that if I weren't 5 mos pregnant, I would go get a motherfucking job and pay someone else to listen to it.

He's got a clean diaper, he's been fed, and then fed more, I've given motrin (as I'm not sure if it's teething pain or not, but he's chewing on his hands), I've given teething tablets. I've held him, I've let him go when he got mad at me for holding him, I've sat on the floor for so long my legs started falling asleep... so when I got up to get into a chair, he FREAKED. He freaked when I went to use the bathroom. And when I went to get him cheerios. He freaked when I went to answer the phone... most of these times I didn't leave the room. He was playing by himself, not even sitting near me, but my moving in any direction away from him sparked the screaming.

I don't know what his problem is... but I am DONE.

He's now been in his crib 15 minutes and has been silent for the last 10. aaaaahhhh... blissful quiet. I'm off to fold laundry and take a shower.
Posted by Allison xoxo at 9.5.06 No comments:
Email ThisBlogThis!Share to TwitterShare to FacebookShare to Pinterest

My laptop is in the shop... *sigh* and of course the technical fuckers that are supposed TO FIX IT, haven't even looked at it as of 6pm last night. So that means I have to use aaron's pc to post, which isn't a big deal except that it's in the living room, barricaded so mr. nosey pants can't start poking around under the desk.

that and I have ZERO motivation to do much of anything lately, let alone post. I'm tired. so very, very tired. I am headachey... today anyway, they haven't been to bad lately, and I"m just ... not in the mood to update. Probably because I have to do it when I can rather than when I want to and it stifles me. eh.

anyhoo, not much new here... we have the big ultrasound next wednesday and if baby is cooperative we find out the gender.

I think nolan is cutting a molar, either that or he's in need of an attitude adjustment. We went to sears on tuesday to do pics, but he was AWFUL... seriosuly. bad. screeching at us when we tried to sit him down, yelling, protesting... refusing to look in the direction of the camera. *sigh* she managed to get 2 decent shots, but we ended up leaving w/o paying because she had to call tech support after alot of probs w/ the computer. I sat there for 40 mins and then thought 'fuck it'. and we left. we are going to walmart to try it again today, wish us luck.

this is for nessa, because she asked so nicely, and because I am so insanely jealous that she is already potty training. :-)