Man, I seem to have caught some kind of chest cold and it BLOWS. I'm tired of feeling like this... overall I feel ok, but the chest tightness and coughing... yeah. I'm over it. Nolan seems to be fighting something off as well. We had a busy weekend, sickness or not. Friday night I went to Costco and got that end of the shopping done, and Aaron took the kids to church for pageant practice. I went through my clothes and got rid of bunch ... I don't know why I hold on to so much shit... I mean some of the crap I got rid of were rags.

Saturday morning I ran some errands... I needed new jeans as I've lost a bit of weight recently. Then I had to get prizes and supplies for the Christmas get together I do with my friend Jen and her girls. I discovered that our local dollar tree sells basically the same wrapping paper that I was planning to get at Target... score! Anyway, after that excitement I took Sethy grocery shopping with me and then we had to be at church to get ready for the pageant. The boys did great, Nolan was a shepherd and seth was an angel. It was very cute. Afterwards, Aaron's cousin Mike and his wife Sarah came over for Pizza, it was so great visiting with them. We don't get to see them nearly enough. The boys showed off and delighted in having company over.

This morning we had another showing of the pageant and my sister and her family came to watch. Afterwards we went home and realized we had nothing going on for the rest of the day. We decided to surprise the boys and take the lightrail down to Seattle. There is a carousel at Westlake, and the gingerbread houses built by architects at the Sheraton on display. Then we decided to truly blow their mind and go to Gameworks. It was a pretty fun day. And you know, we spent 30 bucks so they could redeem their tickets for about 4 bucks worth of plastic shit and candy, so they were thrilled. 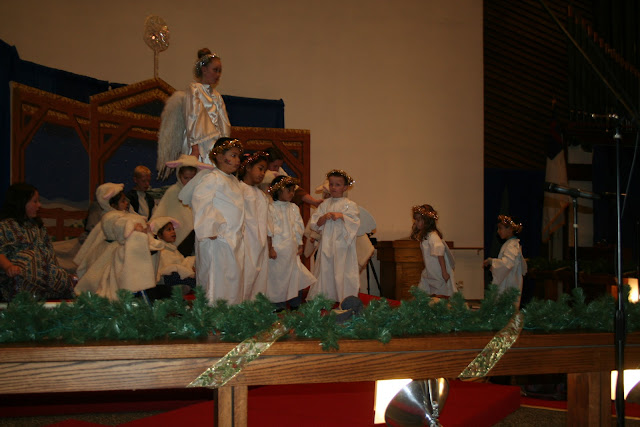 Posted by Allison xoxo at 2.12.12
Email ThisBlogThis!Share to TwitterShare to FacebookShare to Pinterest