It’s been one year since my friend Toni passed away.  It’s difficult to believe that someone so full of life could be gone and so soon.  She was 37 years old, a wife, a mother … and dearly loved by all of her extended family and friends.

I met Toni … or Choni, as I liked to call her (I’ll get to that) when I was 17 years old.  I started working as an afternoon aide at a local daycare center.  Toni worked in the toddler room, and my interactions with her at that point were limited to staff meetings and the occasional hour or two I would spend covering breaks or something in her room.  Personally, I hated the toddler room, But Toni seemed to thrive in there.  She was so good with the little ones, and she and Debbie (our coworker and one of Toni’s best friends) really provided a warm, and nurturing environment.
It wasn’t until a few years later when Toni and I really became friends.  I don’t really remember how it happened, but we started chatting and I would take my lunch breaks in her class during naptime.  We would go to the movies on Monday nights, as it was half price night at the Regal Cinema theaters.  She got me to go to a haunted house once… she loved haunted houses.  I hate them… she talked me into it and at the last minute I tried to fall back and leave the line and she grabbed me around my middle and said “you’re not leaving me dammit!”  After that she would try every year to get me to go and I refused… “I can pee my pants at home for free if I wanted to!” she would shake her head and laugh.

One of my favorite things about Toni was her laugh.  She had one of those contagious laughs that make you want to keep telling a story because it’s so fun to hear her reaction.  She could tell a story better than anyone I’ve ever met too.  In fact, years after leaving the daycare we would meet up once in a while and just talk… and laugh.  The funny thing is, I’ve met a few of her family members, but from all the stories I’ve heard I feel like I know themall.

Besides laughing at stories, she had a wicked sense of humor.  I once had the stomach flu and missed a day of work.   I came back to find a homemade card that read on the outside “I’m sorry you’re sad, I’m sorry You’re sick.” And when you opened it up, there was a hot glue stick taped to the inside and a message “so I got you this suppository stick.”  Then she went one better and had all of our coworkers sign it.  It was horrifyingly awesome.
She got the nickname Choni because she would always tell her kids in her class to go get their chonis (underwear) when she was helping them change.  It always made me laugh, so I started calling her choni just to bust her chops, but it stuck.  She was always choni to me after that.
She had a way with some of the more difficult kids in our daycare too.  There was a three year old boy who she took on because the other staff members were fed up.  Truth be told he didn’t have the best home life, and he had a trucker’s vocabulary to boot.  They didn’t always get along, but she made do a lot better than anyone else… once she wore her hair in princess leia buns to school.  She was always doing stuff like that… fun things to her hair or nails for the kids.  Anyway, all morning this boy had been giving her the stink eye, and at naptime (when he would typically melt down) he argued and yelled and threw a fit, and when she put him in time out he yelled at her “I hate you!... and your fucking hair!!!!”  and she had to turn away because she was laughing so hard.  She looked at me and I said “…well, he’s got a point.”  It was hilarious.

The two of us were also good friends with another coworker – Sandra Kim.  We would have lunch or meet up for dinner… they would attempt to get me to go with them to see scary movies… we did a lot together.  Sadly, we lost Sandra in 2009.  Toni and I visited her at Harborview once… it broke our hearts to see her so sick and a fraction of the friend we knew and loved.  A few months later when Sandra passed away, I sat by Toni at the funeral.

The light of Toni’s life was her kids and her family.  She was an amazing mom.  Devoted doesn’t begin to cover it.  She delighted in them, she joked that they drove her crazy, but I don’t think anyone made her laugh more than her son.  Devante was maybe a year and a half … eventually, he was in my school age classroom at the daycare and my most favorite memories are when Toni would come in to pick him up or sit in and visit while he was there.  The dynamic between the two was hilarious.   Much later, after we had both left the daycare, she had a little girl named Angelina, and it was so sweet to see her with a little girl.  Even better, the stories about life at home with a teenage son and a little girl left us giggling time and time again.

I once went with her on a field trip with her class of 2.5 year olds.  We went to the Pacific Science Center, it was just the two of us and 10 littles.  For the most part we had a fine time… barring some scary moments while driving through downtown Seattle in a 13 passenger van.  (She made ME drive.)  Everything was fine until we got to the butterfly exhibit.  She couldn’t believe that I was scared to go in.  She never let me live that down.  The part that stands out for me on that trip though, was that as we were waiting to get on the freeway ramp, there was a man holding a sign, asking for money.  She didn’t hesitate to dig around in her purse to find a few bucks (I think she ended up giving him 5 dollars) and hand it out the window.  I looked at her incredulously and she said “what if that was someone in my family?  I would want people to help them out.” That’s who she was… she was generous and kind… to everyone.
In the past few years, our lives got busier and busier and we saw less and less of each other.  We would get together once or twice a year for lunch or dinner and it was like no time had passed at all.  We would spend the entire time giggling and sharing stories and gossiping.  I will miss that so much.  The last time I heard from Toni was a few weeks before she passed away. We were going to get together soon, as it had been a while… she told me that she was pregnant again and I was so excited for her.  The last thing I expected was to find out a few weeks later that she had passed away.

I'd like to think she's up in heaven, holding her baby and laughing with Sandra. Smiling down on her family and her friends. 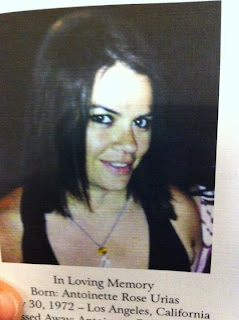 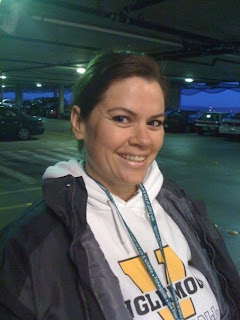 Toni... the night we visited Sandra at Harborview in 2009. 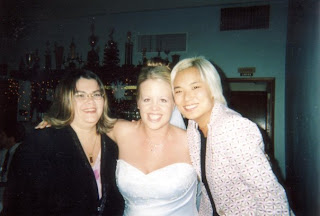 Toni, Me and Sandra at my wedding.  The only picture I have of the three of us.

Posted by Allison xoxo at 17.4.12
Email ThisBlogThis!Share to TwitterShare to FacebookShare to Pinterest